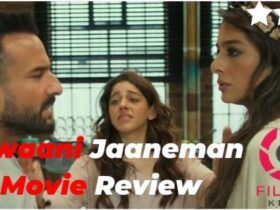 No, seriously, even though some of the cinemas finest are hand-picked from the South Cinema yet Bollywood remakes make you stick to your chair. Among such, today, I will be reviewing Durgamati – The Myth. Released on 11th December 2020 on Amazon Prime, this movie deserved a theatre release.

Remake to Telugu-Tamil bilingual film Bhaagamathie; this film starred one hell of a cast – Bhumi Pednekar as Chanchal Chauhan IAS / Durgamati, Jisshu Sengupta as ACP Abhay Singh, Arshad Warsi as Ishwar Prasad, and Mahie Gill as Satakshi Ganguly. Speaking of the cast, did I mention Bhumi roared like a true lioness and made an unbreachable mark in the movie?

Now a large chunk of people is going gaga over having another South move remade in Bollywood. Well, I support it.

South cinema stores some of the greatest storylines of all time. And like Billions, I don’t know Tamil or Telugu, and I miss the chance of enjoying such classics.

Now when these movies are remade in Bollywood, I can finally taste them and find myself satisfied. Also, 7 out of 10 times, Bollywood makers try to make it look exactly like the original one. Okay, I know it didn’t sound the way it supposed to be but hear me out –

Imagine if Kabir Singh wasn’t made in the first case. Did anyone of us know about that story? No, we didn’t. So, in a nutshell, having south remakes in Bollywood is good. However, I hate remakes of the song. That is something Bollywood should stop doing.

How is Durgamati a good movie?

Apart from the storyline, the movie tells many things about “what a woman can do when she decides to do it?” Further, when you continue to think that Durgamati is a horror flick, you will start judging it, but the moment everything has been established and the traps start to unfold, you will realize how good the story is.

In my opinion, if you haven’t watched the film, you should but not just for any one character or Bhumi. Durgamati has this vibe where you will think that “okay, this will happen next or that will happen next, and we know what will happen now.” But as soon as things reach the point of equilibrium, all of your speculations would be shunned.
The entire cast’s acting skills are unquestionable, but it’s the storyline and execution that keeps you around.

Does Durgamati have any loose ends?

Yes, there are many. For instance, the funny scenes added in the movie weren’t needed at all. This was not a horror-comedy but a horror-thriller; therefore, any comedy scene in the movie didn’t make any sense.

Another thing that I didn’t like in the movie was the accent of Mahie Gill. I mean, she is a pretty good actor, and I know that she was playing a Bengali role, but somehow it wasn’t good enough or should I say, it didn’t look as real as it was supposed to be.

If we divide the movie into two halves, the first half was comparatively slow and less engaging than the second half. I mean, I know you need time to establish everything and all, but I think this was the point where the makers could have done a few changes and not “cut, copy, paste” everything from the original.

So finally, should you watch the movie?

Yes, of course! Without any question. Of all the theatre and OTT releases on 11th December 2020, Durgamati stands as the best choice.

Before you go, check out my first reaction just after watching the movie

#DurgamatiReview Decorated with the impeccable acting skills of @bhumipednekar, #DurgamatiOnPrime roars at an untouchable note. Forged by the hands of a TRUE writer, the movie unfolds like a classic TALE. Without any question,#Durgamati is a"⭐️⭐️⭐️⭐️-must-watch" on @PrimeVideoIN pic.twitter.com/xH3G9KgB2m

Of all the theatre and OTT releases on 11th December 2020, Durgamati stands as the best choice.