Films are a staple entertainment source for Bollywood fans. Investing in films is often risky, but one can be assured of a good ROI when the film earns well on B.O. to become the highest grosser of that year. A film becomes a high grossing movie when it earns more money than other films released in that year. Also, fans and industry experts consider the earning and profit of a film to judge the success of a movie.

For the moviemakers, 2021 turned out to be a roller coaster because the pandemic situation made it unpredictable to analyze the opening and closing of cinemas. On the other hand, OTT platforms developed as an alternative medium to release films. As a result, some of the top production houses made bulk deals with these platforms. Some movies impressed the audience, while some failed to impact the moviegoers.

What could have been on the top other than a mega-budget Rohit Shetty Directorial family entertainer? Sooryavanshi had all the ingredients to make it the highest-grossing film. It starred big superstars like Akshay Kumar and Katrina Kaif. There were cameos by Ajay Devgan, and Ranveer Singh reprises their roles from Simba and Singham. There were chartbuster songs such as the classic Tip Tip Barsa Panni. Sooryavanshi was made on a mega-budget of 160 crores and had powerful action scenes performed by Akshay Kumar. The total Box Office collection stands at ₹294.17 crores. The film’s release was postponed multiple times owing to the covid-19 situation, and the film was finally released on the occasion of Diwali 2021. The film is based on a Mumbai Police cop who tried to uncover and stop the conspiracy to attack the City of Mumbai. After its theatrical release, the movie is streaming on the Netflix platform.

It’s not surprising that a film with Mega movie star Salman Khan found a place on this list. Antim- The final truth is produced under Salman Khan productions. The thriller movie directed by Mahesh Manjarekar also starred Aayush Sharma, Jisshu Sengupta, and Mahima Makwana. The plot is about a poor farmer’s son who shifts to the city and becomes a brave gangster. Soon, he is engaged in a brawl with an honest and dedicated police officer who does not give up easily. The filming was done on a budget of 48 crores and managed to get a box office collection of Rs. 58.37 crore. Also, the music of the film managed to impress the audience. The movie has some intense action scenes and Sufficient drama giving the fans a reason to watch the film.

Do you know Bell Bottom was the first Bollywood movie to begin its filming schedule amidst the covid-19 situation? Bell Bottom was the third highest-grossing movie of the year 2021. The action thriller film starred Akshay Kumar, Lara Dutta, Huma Qureshi, and Vaani Kapoor. The Ranjit Tewari Directorial earned a box office collection of Rs. 50.58 crore and received an opening day collection of Rs. 2.75 crore. The opening weekend earning of the film was Rs. 12.75 crore. The mega-budget film was made with a whopping budget of Rs.170 crore. The film got a mixed response, and it was praised for its screenplay, fast-paced narration, art direction, background music, and cinematography. However, the film was criticized for its low-quality shots in action sequences and weak climax. The film revolves around the story of a flight hijack by terrorists. In this situation, Anshul (Akshay Kumar), an undercover agent, is tasked with the mission to rescue the passengers held as hostages. He faces several obstacles to become successful in his quest.

Tadap marks the debut of Ahan Shetty into the film Industry. This romantic action flick starred Tara Sutaria and Ahan Shetty in the lead role. Interestingly, the film is based on the 2018 film RX100 by Ajay Bhupathi. The film is based on the passionate romance between Ishana and Ramisa. They fell madly in love, but things soon take a turn when they have to disclose the affair to their parents.

The groundbreaking Hindi Transgender Romantic film stars Ayushmann Khurrana and Vaani Kapoor in lead roles. The film, directed by Abhishek Kapoor, received a box office collection of Rs. 38.42 crore. The film revolves around Manu, a bodybuilder from Chandigarh who falls in love with a Zumba Teacher, Maanvi. Everything was fine until a new revelation created turmoil in their love story. The movie made a budget of Rs. 32 crore and handled a sensitive subject with maturity. It received a box office opening of Rs. 3.75 crore and an opening weekend collection of Rs. 14.53 crore.

So far, these were the top-grossing films for the year 2021. 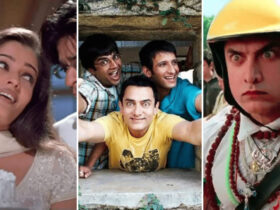