We have grown watching the mighty Godzilla and all we have seen him is as a ruthless monster. But this time we will be at his mercy. He will be our savior and he, the king of monsters, will side by us (looks likes so). The new trailer of Godzilla: King of the Monsters has just dropped and it is as exciting as first born.

Which titan will save humans and which shall become the reason of our wrath?

This is the question that will be solved when the movie hits theater. As per the synopsis of the movie, this movie has the crypto-zoological agency Monarch facing against a battery of god-sized monsters. Including Godzilla, the fight will see him against Mothra, Rodan, and his ultimate nemesis, the three-headed King Ghidorah.

Info on Godzilla: King of the Monsters

Directed by Michael Dougherty, the movie has a confirmed US Release Date – May 31, 2019. Starring along with Millie Bobby Brown in the movie is Vera Farmiga and Sally Hawkins.

Watch the Godzilla: King of the Monsters Trailer

Tell us what you think about the trailer in the comment box.

10 Hollywood Movies Based On Video Game 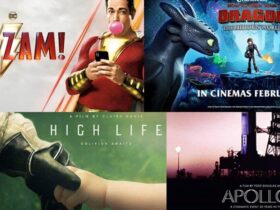