by Filmee Boy 2 years ago9 months ago
3views
0

May 2018, Avengers Infinity War happened, and the wrath of Thanos led to the end of half of our superheroes. While the world was grieving in pain, MCU played another masterstroke with The Ant-man and the Wasp. Yes! This Peyton Reed directorial venture that happens in July 2018 month is something people would want to see. Why? Simple, Marvel has always remained successful in creating a healthy series of suspense with its post-credit scenes. And the vanishing happened after the infamous SNAP of Thanos; people are dying to know what would happen next?

Although, how hard we try, spoilers are always there, ergo, read ahead at your own risk.

What’s in the movie – Ant-Man and the Wasp?

So in simple words, you can say that this movie is an attempt to get Hope Van Dyne’s mother back from the Quantum Realm. The film is “what happened to Ant-Man since his last appearance in Captain America: Civil War?” and the answer to this question is correctly given in this movie. Scott Lang aka the Ant-Man is given a house arrest for two years and is seen grappling with the outcomes of his choices as both a superhero and father. In the first part, few important things were shown –

Can a human return from the quantum realm?

So after Ant-Man, captain America civil wars came into being where we saw Ant-Man teaming up with Steve Rodgers. But in this latest Hollywood movie, the Ant-Man and the Wasp, things aren’t that exciting as they were n the prequel. Yeah, so the story is average wherein Marvel’s old style, there is a villain who happens to be the adverse consequences of someone’s actions in the past, and the villain has come back to either take the revenge or some tech. This time, it was the saving its existence. Skipping all the boring stuff here, let’s say that another aspect of the movie revolves around saving Dr. Hank Pym’s lab from being stolen by the unstable villain. In the meantime, Scott is also shown saving himself from the house arrest by disguising a giant ant in his place. How that happened is not essential but I guess why that happened is. So Scott has a dream where he sees Hope’s mother, and he reveals all this to Dr. Pym over a voice message which Hope listens to, and that’s why he is abducted by her so that the doc can know more. During this time, both are angry with Scott for leaving them when he went on to team up with the Avengers in the Captain America movie. 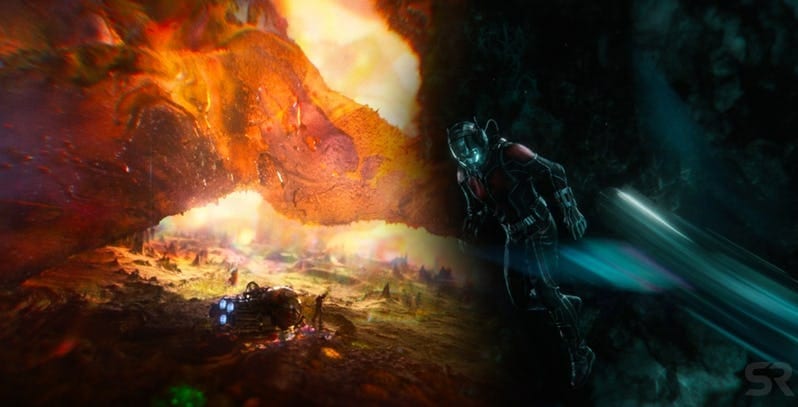 Now the exciting part of the movie is the cars and humans getting small/ tiny and the Ant-Man getting giant again. Okay so the final car chase in the film was good but compared to all that action that has happened in previous Marvel movies, this was nothing. Wasp was good, but what’s more, exciting was the post credit scenes because just after Dr. Pym rescues her wife, there are few things which are revealed –

Pym’s wife isn’t the same woman she was 30 years back.

Humans can survive in the quantum realm for 3 decades with no food and still age at normal pace.

The energy gained from the quantum realm can be used in most unusual ways.

Post-credits scenes and the theory of undoing the infamous snap

So in the post-credit scene, it can be seen that Dr. Pym and his wife sends the Ant-Man back into the quantum real via a small quantum lab shown in the backdrop. The Ant-Man gathers the energy and just when he is to be brought back, the Thanos snap happens and what we see is another mind-boggling thing – both Dr. Pym and his wife vanish leaving Ant-Man in the quantum realm.

So this brings us to some new theories

There are high chances that all those who have vanished after the snap might have ended in the quantum realm and since Ant-Man has once come out of it, might get everyone back.

Since it has been confirmed that Ant-Man and the Wasp are going to be of more significance, this means that either everyone might come back and stop Thanos or it is Iron-Man and team fighting against Thanos.

Also, somewhere it looks like that the quantum theory comes out to be true because now marvel cinematic universe has come out to be a series of unexpected events and we don’t exactly tell what can happen with this quantum thing. And we as fans are excited about what will happen in the upcoming three movies planned for next year.

Go and watch the movie for Ant-man and his friend’s monologue which isn’t that exciting as the previous but the post-credit scenes in the film will make your mouth go wide open.

win
0
win
Hi, this is your Filmee Boy! About me? Well, I am a "Bakchod" who performs way better than "Thugs of Hindustan" by firing "Andhadhun" words. I am the "Simmba" jo kr leta hai har "Stree" ko "Raazi". I am the "Padman" who has always stood at "102 Not Out". Last time when you were being a "Fanney Khan" at one of your "Veere Di Wedding", I was ruling the "Baazaar" of Bollywood by singing "Ek Ladki Ko Dekha Toh Aisa Laga".