OTT Platforms such as Netflix, Amazon Prime Video, and Disney+ Hotstar have already released a plethora of new movies and series with different genres.  To Keep your mind calm in this period of the ravaging crisis caused by the pandemic is very important. Let’s go through this list to spend your weekends excitingly. Grab your seat as we gonna take you through a complete list of new movies and series, having good response from the viewers.

Plot: This time, Director-Eve Lewis Prieto came to make you aware about the importance of sleeping to stay healthy, by telling you Facts and Science. Same as the previous series- “Headspace Guide to Meditation”, this series teaches the important tips to fight insomnia, anxiety, and scrolling social media posts (phones), sleeping pills effects. A guided wind-down is being shown at the end of each episode to let the viewers maintain a healthy sleeping habit. With the cute animated character of Headspace at the core, this series becomes another reason for you to watch.

Plot: This spine-chilling thriller, starring Amanda Seyfried and James Norton, revolves around a young couple- Catherine and George, who has just shifted to an ancient house in the Hudson Valley from Manhattan. The new house soon starts to unfold a long-buried mysteries about which Catherine is completely clueless and unaware. Paranormal experiences start  occurring as Catherine relentlessly tries to answer the mishappenings that are happening in the house. The surprising part is that her marriage holds secrets that she is oblivious of. This show will keep you hooked to the screen with mind-boggling events. So, are you ready to join Catherine in her journey of finding the key to all her problems?

Plot: This series breaks all the social taboos as it revolves around the exploration of female pleasures. With the chief protagonist of Natalia, a computer student, with the help of her two friends Paulina and Monika, build a female-ogaasm-based app, This app helps females to physically explore themselves. The series showcases the journeys of female sexual discovery. Feel yourself to be a part of the world of the three friends as they overcome challenges to launch a female-orgasm-based app.

Plot: This thriller will take you on a roller-coaster journey with the 35-year-old Fatma as she exhaustively goes on to search for her missing husband, Zafer. The story takes a turn when she accidentally murders someone. Since, Fatma works as a cleaning lady, she does not have any other resources to survive this cruel world than to take the path of doom. Fatma goes on a killing spree even after her husband’s doubtful associates know of her acts. Her life takes a radical transformation as she turns to a silent killer, as murder is an outlet to get rid of her miseries.

Plot: If you are an action lover, this series is for you.

The character of John Clark is based on Tom Clancy’s (Author of Rainbow Six) Jack Ryan Series. Played by Michael B Jordan, Clark was involved in a highly covert operation. Later, he goes on a murdering spree to avenge the death of his pregnant wife just because of his being involved in a task that was meant to be kept secret. As the plot progresses, we see a significant danger of war between America and Russia. Clark is facing a challenging situation to choose between fulfilling his responsibility of being a soldier and his duty as a husband to look after personal issues.

The Mitchells Vs. The Machines

Plot: This is an animated series packed with action and comedy revolving around the highly dysfunctional family of the Mitchells. After dropping Katie at film school, the Mitchells decide to go on a road trip. But an apocalypse was awaiting them as the robots revolted and compelled every electronic gadget to trap humans. Now, the humans can be saved from being turned into captives only by the Mitchells and their pet dog and a couple of friend-alike robots. The underlying significance of the show is to retain the human-like attributes and not turn mechanical in a world dominated by technology.

Plot: If you’ve already watched Season 1 of the series, it’s time for you to watch this equally intriguing part of the show. Rasika Dugal and Purab Kohli are all set to return with their tale of infidelity and its effect on relationships. The story takes a 3-year leap after Dr. Meera Kapoor has exposed her husband- “Mr. Aakarsh’s extramarital affair”. A new twist comes up as the revenge-hungry Aakarsh is on a mission to destroy Meera. The equally high-spirited Meera will see the end of it to prevent Aakarsh’s onslaught. Packed with tension and suspense, this series will surely make spice up your weekend.

Plot: Set against the backdrop of Mumbai, this show is centered on Sharad Nerulkar, who aspires to be a famous Indian classical music vocalist. Severe identity and existential crisis are dawned upon him as he finds himself far away from fulfilling his dream. The story progresses to show how Sharad can decipher the truth by identifying his areas of strength.

Plot: This show involves ten well-known comics who are restricted in a space for 6 hours as the participants want to get others to be eliminated, by making them laugh hard. The one who controls his laugh and lasts in the room till the end is declared as the winner. Boman Irani and Arshad Warsi will host the show. Some of the contestants include Aakash Gupta, Mallika Dua, Sunil Grover, Aditi Mittal, and many others.

Plot: This show is an adaptation of Paul Theroux’s novel bearing the same name. This show explores the rebellious adventures of a person who fled to Mexico with his family when the government officials search for him. The series will keep you hooked until the riddle is solved as loads of problems engulf the family.

Plot: Through the tale of a former substitute teacher, the show depicts the lifestyle of the nomads. Frances or Fern understands the significance of home as she ventures to the countryside searching for a job and home to survive the effects of the Great Recession.

Plot: This is an animated series revolving around the first African samurai, the Yasuke. Though, he wants to live a peaceful life, Yasuke is compelled to resort to his old way of combats to solve commotion in a village and save the life of a mysterious child who is the target of lots of murderers.

Have a great weekend watching these fantastic shows! 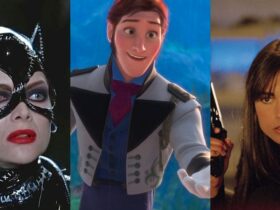 HBO Max vs Netflix: Which One To Choose?